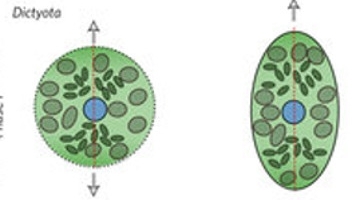 Link to the Nature Plants page

In most complex eukaryotes, development starts with the establishment of cell polarity determining the first axis of the body plan. This polarity axis is established by the asymmetrical distribution of intrinsic factors1,​2,​3, which breaks the symmetry in a single step. Zygotes of the brown alga Fucus, which unlike land plant and animal zygotes4,5 do not possess a maternally predetermined polarity axis, serve as models to study polarity establishment6,7. Here, we studied this process in Dictyota, and concluded that sense and direction of the cell polarization vector are established in two mechanistically and temporally distinct phases that are under control of different life cycle stages. On egg activation, the zygote elongates rapidly according to a maternally predetermined direction expressing the first phase of cell polarization. Which of the two poles of the resulting prolate spheroidal zygote will acquire the basal cell fate is subsequently environmentally determined. The second phase is accompanied by and dependent on zygotic transcription instead of relying uniquely on maternal factors8. Cell polarization, whereby determination of direction and sense of the polarization vector are temporally and mechanistically uncoupled, is unique and represents a favourable system to gain insight into the processes underlying cell polarity establishment in general.